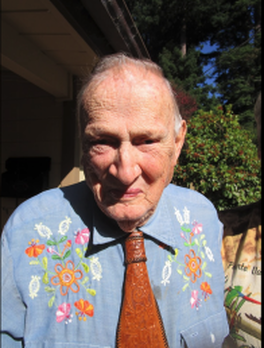 It is with great sadness that we report the passing of Dr. Stanley "Doc" Harris on December 27, 2019. He was 91 years old. Doc was a longtime advisor and mentor of Conservation Unlimited, and retired in 1992 after 33 years at HSU. He joined the Wildlife Department in 1959 as a waterfowl specialist, coming from a position in Minnesota as the states upland game program director. Doc earned his bachelor's and master’s degrees at Washington State College and his doctorate at University of Minnesota. He served two terms as Department Chairman at HSU and received the Distinguished Teaching Award in 1969. He was also named Conservationist of the Year by The Wildlife Society in 1973. Doc played a key role in helping design the Arcata Water Treatment Marsh and Wildlife Sanctuary, and in 2001 had one of the five ponds named after him. Dr. Harris is a life member of the Wildlife Society, serving as section president from 1967-69. He sat on the society’s editorial review board of the Journal of Wildlife Management. His research interests have resulted in close to 80 papers in American periodical literature, mostly on ornithological subjects. In 1991 Doc wrote, “Northwestern California Birds: a Guide to the Status, Distribution and Habitats of the Birds of Del Norte, Humboldt, Trinity, northern Mendocino, and western Siskiyou Counties, California” which was republished in 1996. Doc has written more than 120 book reviews, 150 features on birds, and compiled more than 90 field note columns for various publications. Doc was instrumental in creating the displays and exhibits for the new Wildlife and Fisheries Building when it was dedicated in 1999. Wildlife Room 238, the Harris Study Room and Wildlife Displays, was dedicated in He and Lori's honor in 2002. In his career, and in his life, Doc left a cohort of professional biologists spanning more than 3 decades and across the globe. His impact on the HSU Wildlife Department and the birding community in northern California is unparalleled. Not only was Doc influential as an advisor to Conservation Unlimited, but he changed many lives (including mine) as advisor to the Student Wildlife Conclave team. Docs guidance led the HSU Conclave team to earn more first place awards than any other university in the competition. He is finally once again with his wife and best friend Lorene (Lori).
-Brian Barton ('82) CUAA Board Chair​